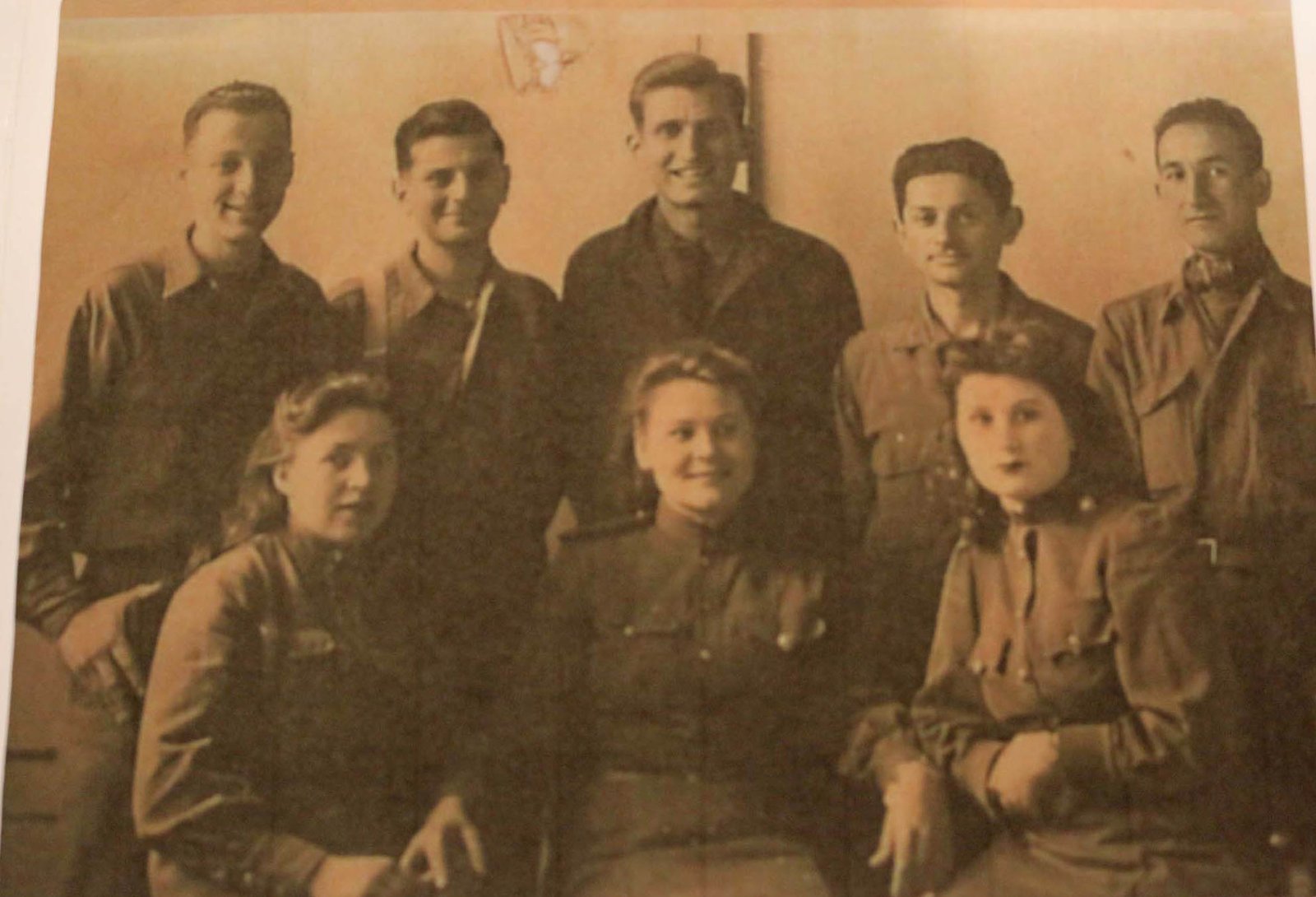 At this year’s reunion in Washington DC, Barney Mayrsohn, 423/CN, shared a picture of himself along with four other POWs at Stalag IV-B posing with their liberators, three Russian women tank drivers.

Barney marveled about the Russian women driving tanks to war but also wondered aloud about who the last commandant of the camp in late 1944-1945 might have been and what happened to him after the war. Barney felt like the commandant may have risked his own life to save his by sheltering him and others at Stalag IV-B rather than sending them off to work camps designated for prisoners of Jewish decent.

That evening I sent off an email to Uwe Steinhoff at info@lager-muehlberg.de to see what we could find out. Uwe was eager to help and after some research provided the following account;

…now I found the time to look into the books.

The camp commandant of Stalag IVB at the end of the war was Hauptmann König.     In civil life, he was a teacher, and in most reports he is described as a reasonable man.

On April 13, 1945 Hauptmann König ordered "the men of confidence (the leaders of POW nationalities) to be responsible for the discipline of their own men". However, the Germans were still in charge of the camp. A week later Hauptmann König asked the men of confidence, if they wished to move their nationals westward over the river Elbe. All nations rejected this and insisted of staying inside the camp (there was still fighting going on outside), except the Poles, who were not eager to meet the Soviet Army. The Poles moved.

Also, in these days, individual POWs left the camp and moved westwards. But, because it was so dangerous outside, also a few thousand new prisoners arrived in the camp and could only be housed in tents. It is estimated that 30000 persons were in the camp designed for maximum 20000.

There was little food, no bread available.

On April 21, 1945 Hauptmann König said goodbye to the men of confidence.

König said that after the war they can meet him as head teacher (Oberlehrer) in Tischen (?)/Baden. Such a place does not exist, and I'm not sure, what he could have meant. No further information on him.

In the night to the April 23. the Germans (and the Hungarian watch-guards) left the camp.

On April 23, 1945 the Russians entered the camp, Cossacks on horses. People went out of the camp and a lot of looting started. Then, diseases spread out in the camp and the officers made order after a few days. On April 25 the first American patrol came to the camp.

On April 26 a Russian officer took control over the camp. The prisoners of war were now in charge of the NKVD, a secret soviet police. After two weeks, the Americans and British could go to Riesa, where it took two more weeks to hand them over to the American forces. Other nations had to wait longer to be repatriated. It is estimated, that about 4000 men fled the camp earlier to reach the American lines on their own. This was very dangerous, because they were not armed, and everywhere was chaos, killing, dead people on the streets and in the houses in these days.

Another lead officer in the camp was Hauptmann (Captain) Könitz. In civilian life, Könitz had a market garden in Mühlberg. During the war, he was responsible for the work commands of Stalag IVB. After the war in autumn 1945, the Soviet NKVD captured him and brought him (as a civilian, not as a POW) into the NKVD camp Mühlberg which was then opened at the location of Stalag IVB. Like 6700 of his fellow prisoners (>21000 in total), Könitz died in the NKVD camp Mühlberg of starvation and bad conditions. I know his son, he is a very fine man, he was a priest, is now retired and suffers still from the early loss of his father.

Our grandfather was 3 years in Soviet NKVD-camp Mühlberg, before he died in 1949 in Soviet camp Buchenwald (yes, they run it further). We are members of an organization called Initiativgruppe Lager Mühlberg e.V. and we care about all the camp victims of Mühlberg, regardless what time. The organization is made up of former camp inmates (some still living) and their relatives.

We are happy if you just spread the word in your circles, that some people doing this in Germany and are ready to answer questions.

In the back, there is my friend Piotrek from Poland, his grandfather was a POW in Stalag IVB and died soon after the war from his wounds.     Please help us!

If you know more about camp Mühlberg and the people there, please write us at: info@lager-muehlberg.de

Don't hesitate to ask your friends and relatives about prisoners of war and their destiny. Talk to other people about POW camps and Soviet special camps.