(Click here for a Microsoft Word version of this page) 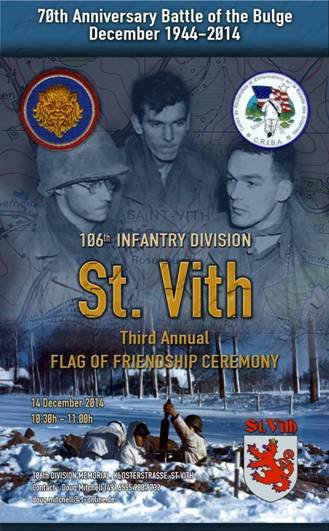 2014 is a year of remembrance. For starters it’s the bicentennial of the Ghent Treaty, which put a formal end to the state of war that had existed between Great Britain and the United States of America since 1812. This year also marks the centennial of the Great War. But perhaps most important it also marks the 70th Anniversary of the largest land battle in American history: the Battle of the Bulge. As we approach this 70th Anniversary in December, commemorations will  be plentiful at various towns and monuments across the Belgian Ardennes and Luxembourg.

We’re proud to announce that on December 14, 2014 for the third consecutive time since 2012, the men of the 106th Infantry Division will be honored in the town where they made history in the icy winter of 1944, St. Vith. For the 70th Anniversary of the Bulge, the ceremony will be something special. A formal ceremony and wreath laying at the division monument take place at the Division memorial in St Vith, with a complimentary reception courtesy of the town council. Expected are a full column of vintage WWII jeeps, trucks and tracked vehicles as well as a planned reenactment of the defense of the Prümerberg defense. This column will retrace the route of the 106th Division trough the St Vith pocket towards Vielsalm, by way of Rodt where a luncheon will be held at the Biermuseum. The column will continue to Vielsalm where the 106th Division will also be honored at the Rencheux Bridge monument, in cooperation with the C47 Club Ardennes Salm Chapter.

If you are interested in attending the ceremony, feel free to contact myself or Doug Mitchell by email at doug.mitchell@t-online.de It will be a visit worth remembering.

For last year’s ceremony we had the honor of having Herb Sheaner (422/G and Association Past-President) and his son Mike (Association Treasurer) present as representatives of the106h Division Association. As most of you know, Herb served as company scout and sniper with company-G of the 422nd Infantry and was a prisoner of war at Stalag IV-B. 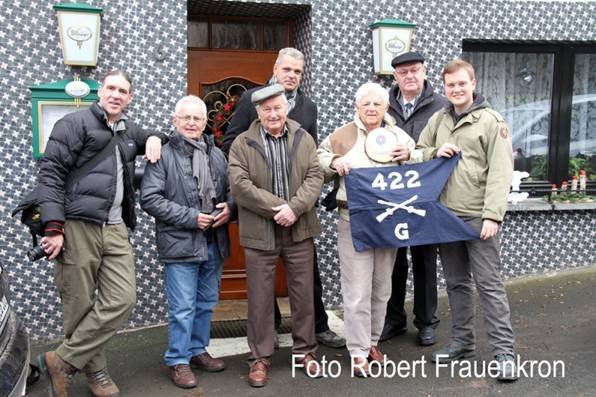 The day before the ceremony the US-Dutch-Belgian triangle behind the Flag of Friendship [FOF] ceremony (Doug Mitchell, Hugo Rietveld and myself) met Herb and Mike Sheaner at the former headquarters of the 422nd Infantry Regiment, the Gasthaus “Zum Kuhlen Grunde” in Schlausenbach.  Assembled there by Hugo were three local German witnesses of the fighting that took place in the area in December 1944. The men were young boys when the 106th Division opposed the German 18th Volksgrenadiers in their hometowns of Andler and Auw. Stories were exchanged over a bowl of hot soup before our group headed out into the forest, looking for the location where Herb was captured on December 21st, 1944 with the group known as ‘the Lost 500’. After the surrender of the better part of the 422nd and 423rd Regimental Combat Teams on December 19th, approximately 500 men under the command of Major Albert Ouellette and Major William Moon –both battalion exec’s in the 422nd- organized a defense of the regimental motor pool in the vincinity of Laudesfeld. We eventually found Herb’s final position on a hillock near the Linne Ravine and visited the ice swept Hill 576 where we put up a plaque in honor of these men back in 2011.

The next day, at 10.30 am many Belgian and German locals, WWII history enthusiasts, friends of the 106th and dignitaries assembled at the Division memorial in St Vith. An impressive number of original Jeeps and even a US Halftrack were parked beside the monument, in the shadow of the building where the division headquarters of the division once stood. The vocation was given by Captain Zachary Nash, Chaplain of the 52nd Fighter Wing. Herb, as past-president of the 106th Association addressed the crowd in a poignant speech. We can also read Treasurer Mike’s fine speech on pages 36 and 37 of the previous issue of the CUB (Vol. 70, Nr. 1). I told the group the story of Captain Jack Pitts (590/A) and his twin sister Jill Knappenberger. Jack’s life was cut short in the opening minutes of the Bulge by a German 88, while trying to rally his men to take cover. Just two days before he had a special reunion with his sister Jill, a Red Cross Clubmobile driver, on the front lines in Germany.  Jill is an avid and loyal reader of the CUB.

The recipient of the 2013 Flag of Friendship was Eddy Monfort. Eddy, whom many of you know as a personal friend, has been involved with the divisional history over the course of many decades. As an inhabitant of the village of Malempré he has studied the battle area of the Manhay-Baraque de Fraiture sector for decades and has authored several excellent books on the subject. His newest achievement is the founding of the non-profit organization “Ardennes-White Star”, which aims to keep alive the history of WWII by organizing meetings and events with schools and teachers. Eddy Monfort is a most worthy recipient of the FOF as an accolade for his many years of local service to the 106th Division Association.

After the laying of flowers and wreaths, beverages were served as a courtesy of mayor Christian Krings and the town of St Vith at the hotel Pip-Magraff in the center of town. From St Vith a column of WWII vehicles headed to the Rodter Biermuseum for a wonderful luncheon.

In the afternoon the column took to the Château de Farnières in Grand-Halleux where there was a reconstitution and reenactment of a US WWII camp. As the December cold was ever present as well, Herb was offered a heavy wool overcoat, wool cap and even a steel helmet and M1 rifle. This proved an impressive sight for the crowd of people awaiting the convoy’s arrival at the Rencheux bridge, where Herb arrived in a weapon’s carrier wearing full combat dress and toting a rifle. A photo-op was inevitable to say the least. Mayor Elie Leblire of Vielsalm presided over the ceremony at the Rencheux monument, honoring both the defenders and the crossers of the bridge in December 1944.  Erik Van der Hoeven of the C47 Club Ardennes Salm Chapter inaugurated the Wall of the Giants, dedicated to individual soldiers who distinguished themselves in combat near Rencheux and Vielsalm. Herb could experience first-hand that the Belgian people have not forgotten the service of the American GI’s as he was officially made honorary citizen of the community of Vielsalm.

The day concluded over a complimentary glass of wine (or Belgian beer) at the town hall. We were honored to have Herb and Mike Sheaner present for the 2013 edition of the Flag of Friendship. The presence of actual combat veterans of the Battle of the Bulge is always a special occasion for the Belgian people to say thanks and to let them know that their service will never be forgotten.

We are looking forward to seeing you all in St Vith in December. 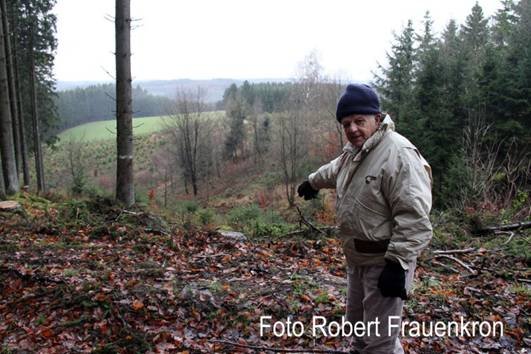 Herb at the location where he was captured on December 21st, 1944 near Schönberg, Belgium. (Photo by Robert Frauenkron) 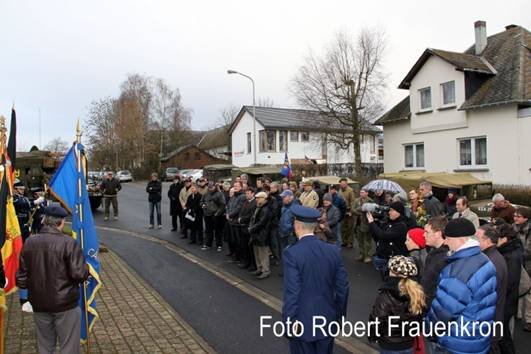 The attending crowd at the 106th Infantry Division Memorial in St Vith. In the front, with his back to the camera is Captain Zachary Nash, chaplain of the 52nd Fighter Wing, Spangdahlem Air Base. (Photo by Robert Frauenkron) 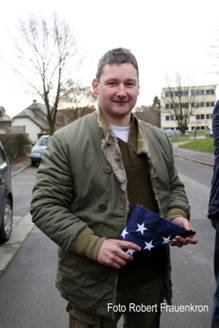 2013 recipient of the Flag of Friendship: Eddy Monfort. (Photo by Robert Frauenkron) 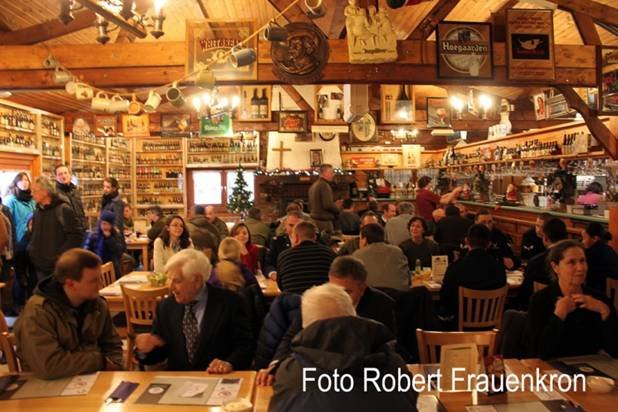 The luncheon at the Biermuseum in Rodt. Also presented there was a display of pictures and items pertaining to the fighting that took place in the St. Vith pocket between 16 december 1944 and 25 January 1945. (Photo by Robert Frauenkron) 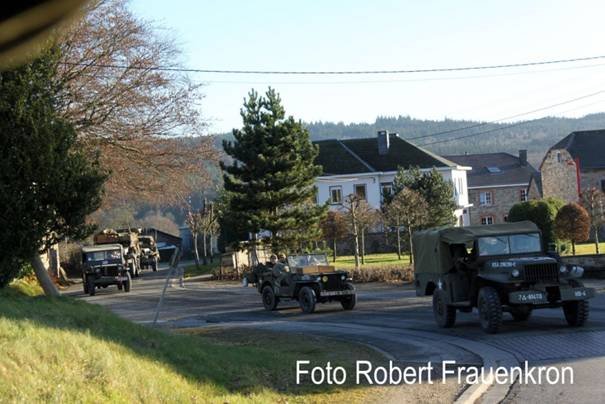 The column of American WWII vehicles passes through the Ardennes town of Petit-Their on the way to Vielsalm. (Photo by Robert Frauenkron) 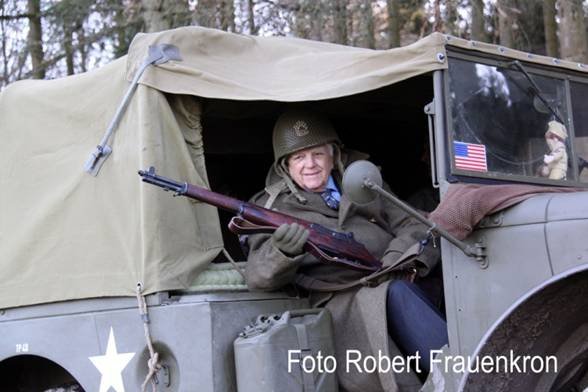 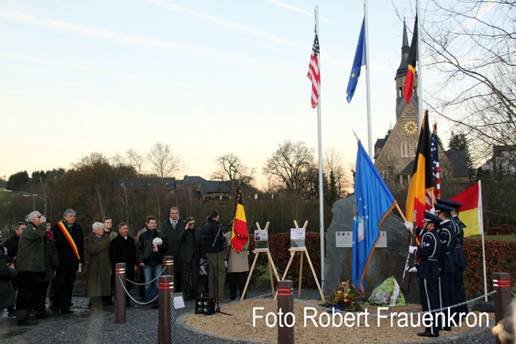 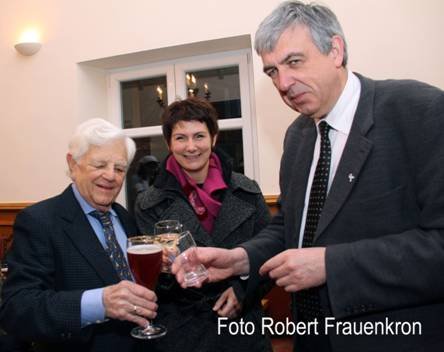