I have tried several times to begin my Father's time in service and with the 106th Infantry Division 423SVC. To begin and to write is still difficult for me. As the time since his passing is short, and I find myself becoming emotional. As I know the story, so do I envision the man and the suffering he and so many others endured. My research took over a year, and yet I still came up short in a few areas.

What I do know for certain is he entered the U.S. Army Dec 29, 1942, left for Basic Training on Jan 2, 1943 to Ft Devens, MA. From here, according to discussion my Dad held with my husband, he was next assigned to Fort Jackson, SC. After getting field experience in combat -alike- conditions during the Tennessee maneuvers in January 1944, the division was transferred to Camp Atterbury, on March 30th, 1944 for advanced training. Although it is documented the men of the 106th shipped out aboard the Queen Mary on November 10th, 1944. My Father's DD214 indicates he left at an earlier date. Oct 17, 1944.

Which is documented in information I received from former 106th members. The purpose of these men entering the European theater earlier than the bulk of the 106th is not known to me. I did learn however, once they arrived they had much down time, and little to do while awaiting the arrival of the complete company. I believe the location they arrived and waited was Cheltenham, England. Where upon the arrival of the complete division, began more intense training for their soon to be transfer to the Ardennes.

After a brief period of consecutive training in Great Britain, the 106th Division crossed the English Channel and entered the European Theatre of Operations at Le Havre.

After a devastating truck ride the men entered the area of St. Vith, Belgium on December 11th, 1944. The 106th was ordered to relieve and take over the positions of the 2nd Infantry Division stationed on the "Schnee Eifel" AKA "Snowy Mountains". This was an area of rugged, pine covered hills on the border between Belgium and Germany. The men of the "Golden Lion" division took over the positions one by one, mostly old German Bunkers of the West Wall that were now reinstated as "US Army Property". There was one drawback. When the men of the 2nd Division pulled out, they were smart enough to take all the stoves with them. So, it would be a cold winter for the men of the 106th.

This area was known as a relatively quiet area. But, according to information obtained from others, the men of the 106th did not find it to be so. Many heard sound and movement and on some occasions the voices of German soldiers. Although it was reported, (in my opinion), it obviously was not taken as seriously as we now know was the beginning of the end for many who were lost, captured, and wounded. They were literally over run beginning on Dec 16th in the Battle of their lifetime. The men of the 422nd were literally wiped out along with many from the 423. The 424th was further back. They retreated to fight another day.

I can only tell you from here what little I know. As the Germans attacked and advanced, my Dad was driving a truck with his partner when all hell broke loose. They were fired upon, and the man seated next to my Dad was shot and died instantly. This was on Dec 19, 1944 as they approached the Schnee Eiffel. My Father escaped the truck, only to face the barrel of a German soldier's rifle. My father called him a " F***en son of a bitch", for which the German soldier who spoke English punched my Dad in the nose. On Dec 19th 1944 my Dad became one of the thousands of men of the 106th captured and imprisoned on that day. The truck, after it was ransacked, which as I have documented from another member, was then blown up. Leaving me to forever wonder, who the soldier in the truck with my Dad was.

From here the rest is history. What was left of 422nd and 423rd where also on Dec 19, 1944, after three days of battle, little to no ammunition, no food, no means of reinforcements or air drops due to weather, they were surrendered. A decision as history dictates was made in an attempt to save the lives of these few, proud, and brave men. Excerpt from the "History of the 106th Infantry Division" {Over the next three days, the 422nd and 423rd Regiments became completely cut off from the rest of the division. Reinforcements from the 7th Armored Division weren't able to break through and an ammo drop failed to arrive. On the 19th of December the ammunition reserves for the two Regiments were exhausted and the commanders, Col. Descheneaux and Col. Cavender decided that further fighting would do more harm than good. To save what was left of their men, they gave up the remainders of their Regiments.
Over 7000 men of the 106th went into German captivity and would spend the duration of the war in a series of POW camps. The 106th Division had been on the line for only five days.}

From here my best information is my Dad began his journey with the men he served with. They were marched for miles, railroaded in box cars, and marched again. (The boxcars as you may know were used for cattle, the men were jammed in these cars at app. 100 men per car. They had no room to move, sit, or lie down. They would take turns sitting, and shifting around at the very least to lean upon a wall. Their helmets became their facilities, as well as their means to drink what little water they were given. Thus the immense outbreak of dysentery and the likes of diseases which eventually took some of their lives, or at best a lifetime of stomach ailments. As well the train was bombed, many were killed. One story tells of the men leaving the train and forming in the field the letters P.O.W. How my Dad journeyed from here is not known to me. But at best I assume he was marched, or in some cases as I've read they were held in a freight yard until another train was made available.

They slept in fields in bitter cold weather. No covering, of course no blankets, only the warmth of each other's bodies lying side by side in a bitter winter known to be one of the worst in German history.

They were warned to march only. There were a few who attempted to pick up an turnip or any means of food source, water or nourishment in this attempt they were shot dead on the spot or left to die by the side of the road.

My Dad being and these men who bore this less than humane treatment made one stop during this horrendous journey where they were stripped of their personal belongings and clothing. Fed a watery version of what they called soup. Told to redress, and in doing so grabbed whatever they could find, as they were being moved out again.

Eventually, they arrived at Stalag IV-Muhlberg, Germany. Here they were tagged, registered as P.O.W''s, fed for what it was worth.

After a short period, my Dad was transferred to Stalag 111 A Luckenwalde, Germany. The conditions here were as bad as those in Muhlberg. On this site a tent or tents were constructed for the overflow of prisoners. They slept on hay in a field under these tents. Cold, lice, dysentery, and numerous other issues plagued these men. There were few to no drops of essentials for these men. Being told in most cases the German's kept much of what was dropped to the Prisoners by the American Red Cross.

My Dad worked on the railroad, building the tracks that would eventually connect (my summation one area of Germany, vital to the War effort to another). In my Father's words, he eventually devised a way to break the hammers, in a fashion the German's would not comprehend, thus limiting their time working on the railroad. At this point we assumed from words of another P.O.W. they were in a work camp somewhere in the vicinity of Magdeburg near the Elbe River.

The only fact in words from my Dad's mouth, the men were working one day and found a cabbage in a field nearby. This one single cabbage became the mainstay for these men at least for a day. They made a feast of it as best they could.

My heart breaks to think and now know as much as I have found. As you can see all I have found is based upon the very few words my Dad expressed of his time in service, and articles I published based upon my limited information in the AX-POW Magazine, and The Cub Magazine- The 106th publication of The Golden Lions. The response I received was over whelming from many men who served in WW11 with the 106th Infantry Division, and other divisions. I visited a few of these men, I spoke with them on the phone. I was even blessed to receive publications and books they had written.

For these men & and the many others who brought me through my journey of my Dad's days in service to his country I am eternally grateful.

I now know much of what my father lived, understood more now than ever why he was the man he was, and how proud in my entire lifetime I was to always call him "My Hero".

I have no definitive facts as to how he was liberated/ repatriated. However I do know Magdeburg was liberated on or near these dates by the 30th Infantry Division. They split into 3 groups, so the information I have is at best vague and uncertain. My hope would be that this was his and the men he was with, liberated by the 30th.

This information I received from Carl Wouters- Historian for this page. ***The Magdeburg area where your Dad´s Arbeitskommando was based was liberated by the US 30th Infantry Division. The town itself was liberated on April 18, 1945. An honest assumption is that he was then taken to the town of Halle, where there was a large collecting point for liberated POWs. The men were then flown out on C-47´s to cigarette camps in France or hospitals in England.****

He arrived home on April 29, 1945, which tells me he was in relatively decent physical health. However due to his imprisonment and the conditions (food, sanitary status etc.) my Dad was plagued with serious stomach issues for the rest of his life.

His Mother and siblings were not notified until May of 1945, and at that time in a letter to my grandmother, his whereabouts were listed as unknown

I do know he received R & R but where is unknown. I had been told upon his arrival home, he was then being prepared to continue his time in the Pacific Theater of WWII. I find this abhor-able, after he had been held as a P.O.W in a German prison camp. But, as is dictated, they do what they are called to service to do. Fortunately the war came to a close after Hiroshima, the peace treaty was signed, my Dad and many others like him were saved from facing more battle.

From this point he served the remainder of his 3 year tour of duty at Ft. Fanning, Texas. Obviously known as a holding center for German P.O.W's.

After WWII1 the 106th was disbanded, and my Father received his Honorable Discharge at the Convenience of the Government (RR-1 demobilization AR 615-365 15 Dec.,1945.

** I have edited Dad's Story regarding his capture, due to new information I have received from other family members. As well as assumptions supplied to me by Carl Wouters regarding his liberation / repatriation** 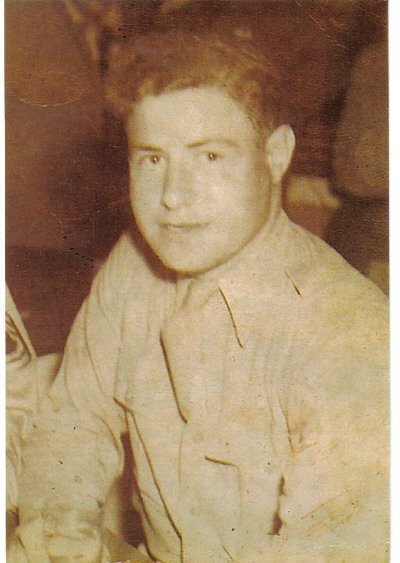 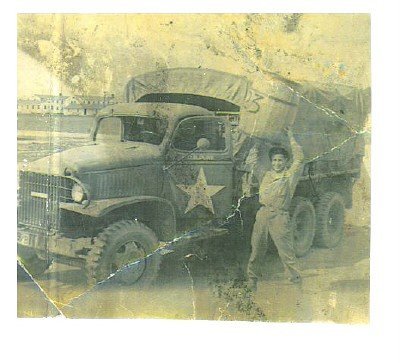 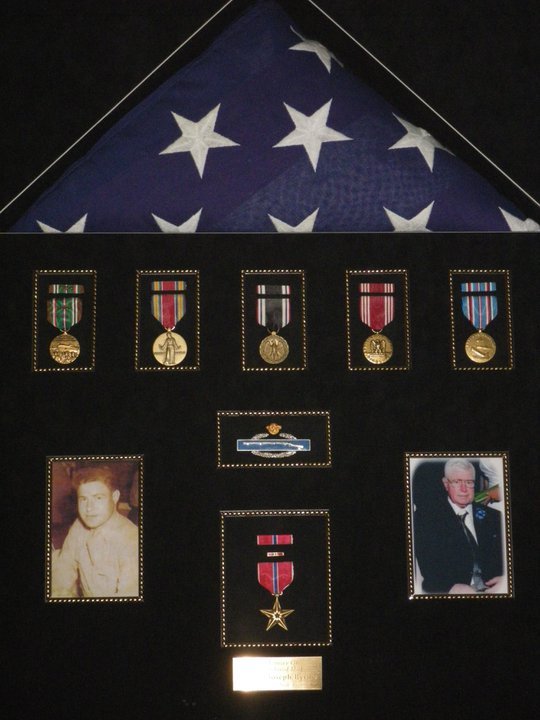 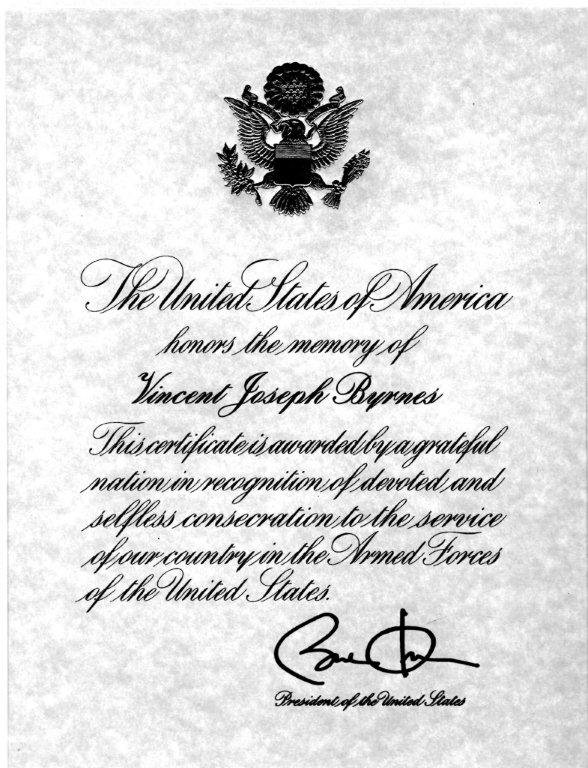 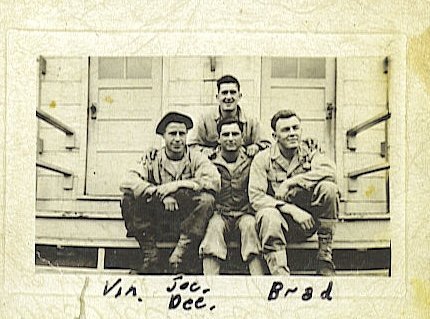