As yesterday marked the 70th anniversary of the beginning of the Battle of the Bulge, I want to take the opportunity to thank all our veterans for your service during WWII. Over the weekend, commemorations took place in almost every town, village and hamlet in the Ardennes in honor of you, the men and women who fought the battle as young soldiers in the winter of 1944.

The sacrifices made by the men of the 106th Infantry Division were remembered at the division memorial at St. Vith with the Flag of Friendship ceremony. Four Golden Lions were present: Dave Bailey (422/F), Dick Lockhart (423/AT), Herb Sheaner (422/G) and Barney Mayrsohn (423/CN). We were missing 424/G veteran Floyd Ragsdale, who was expected to attend but who unfortunately passed away on December 10th at his home in Illinois. The ceremony was dedicated in memory of Floyd and all the GI's who lost their lives during the war and those who have passed away since. A moment of silence was held in their honor. The perpetuation of their stories and memory is a key objective of the newly chartered BULGE Chapter of the division Association here in Belgium.

Recipients of the 2014 Flag of Friendship were Marcel and Mathilde Schmetz (M&M's) of the Remember Museum at Thimister-Clermont, for all of their efforts in perpetuating the history of the division and the soldiers who fought in the Battle of the Bulge.

Attached are a few pictures of the ceremony and the day. A luncheon was organised in the Biermuseum in Rodt, where a display of 106th Division items provided a historical backdrop. After a convoy of vintage WWII vehicles moved along the exact route taken by the troops from St. Vith to Vielsalm, a second ceremony at the Rencheux bridge commemorated the events that took place there on December 23rd, 1944 in the vincinity of the Rear CP of the 106th division. The people of Belgium remember.

Below are a few selected pictures of the day. A full set of pictures covering the St. Vith event can be found here:     2014 Flag of Friendship Ceremony Pictures

Here are additional pictures of both the Flag of Friendship ceremony and the day up 'on the line' on Monday. There was a reenactment group who did an outstanding 106th impression, right down to the bumper markings on their jeeps and trucks. Great bunch of guys and the veterans really appreciated their attention for detail. 2014 Flag of Friendship Pictures Part II

Thank you for your service and God bless the Golden Lions. 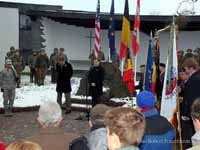 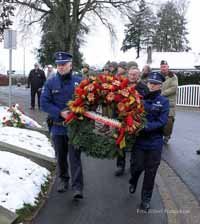 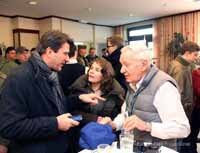 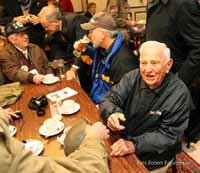 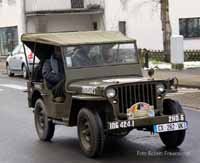 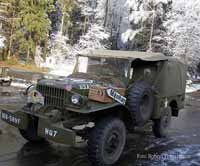